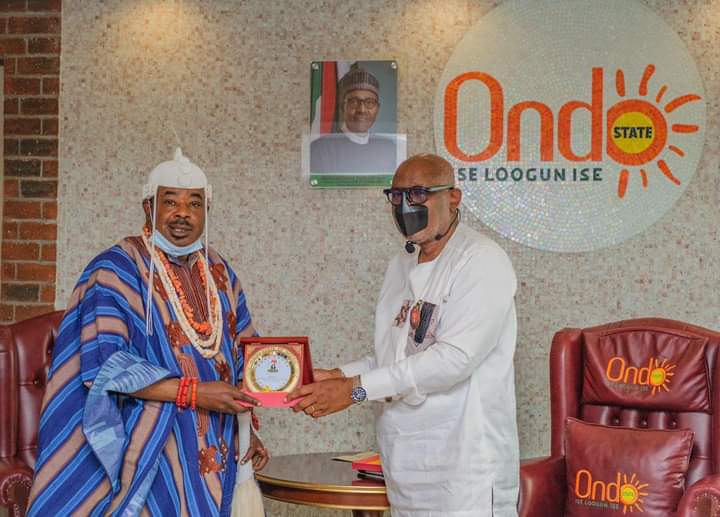 The Governor said the design for road is ready, adding that the road construction was captured in the 2022 budget.

He made it known while playing host to the members of the Akungba Development Union led by the Alale Of Akungba Kingdom, Oba Isaac Sunday Adeyeye in Akure.

Governor Akeredolu lauded the monarch for appreciating his administration’s efforts on security, Infrastructural development among others.

He emphasized that he will continue to deliver dividends of good governance to the people.

“We are happy with all you have done and still doing. We are the community people with common bond , with common destiny and we are here today to express our sincere appreciation to our Governor for the roles he has been playing, the roles he is still paying in the affairs of Akungba community. During our trying period, when we had accidents, the Governor stood by us, he was very prompt.

“He didn’t only come to commiserate with us, he also assisted the bereaved family. We are here specifically to come and say another big thank you to Mr Governor for appointing two of our prominent sons into government.

“The appointment of Gboyega Adefarati and Vice Chancellor of Olusegun Agagu University Of Science and Technology, OAUSTECH, Okitipupa, Professor Temi Ologunorisa. Here, we have seen that history has repeated itself. The late sage, Pa. Ajasin from Owo, appointed Pa Adefarati into that office. History has repeated itself, Aketi the great, has appointed Adegboyega into the ministry of Local government and Chieftaincy Affairs.”