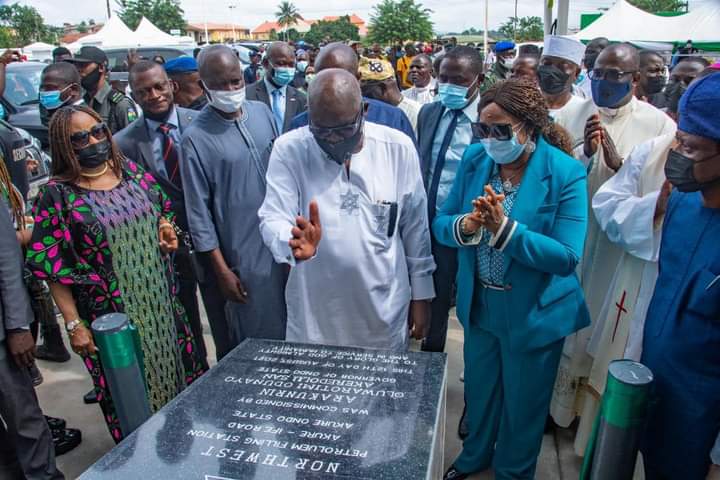 Ondo State Governor, Oluwarotimi Akeredolu, SAN, has assured all investors in the state and other potential investors of the safety of their investments in the sunshine state.

The Governor stated that he championed the establishment of the Western Nigeria Security Network, Amotekun Corps, to checkmate the menace of banditry and criminality in the South West.

He gave the assurance on Thursday at the commissioning of the Northwest Petroleum Mega Filling Station located at Sebi Junction, along Akure-Ilesa expressway, Akure, the state capital.

Governor Akeredolu said criminality has reduced considerably in the State through the collaboration of Amotekun Corps with the regular security agencies.

He used the event to call on the private sector to join the government in the funding of the security architecture by contributing financially to the Security Trust Fund which would soon be signed into law.

The Governor equally directed all owners of illegal gas sale outlets and those operating unapproved petrol stations to immediately close them in the interest of their business and the safety of the people or be ready to face the full wrath of the law as government would go after defaulters.

He explained that his administration has taken infrastructural development, establishment of sustainable industries and entrepreneurship as one of its major policy thrusts.

Governor Akeredolu further said adequate infrastructural development is sine-qua-non to the establishment of sustainable industries and entrepreneurship development in any society.

“This informed our decision to embark on massive infrastructural development across the three senatorial districts of the State. Under our watch, Ondo State has literally become a great construction site, I want to assure you all that we will not deviate from this path of development.

“In furtherance of our economic goals and development, our government has identified tourism as one of the areas where our State has huge potential. It is in this regard that we are working with serious investors towards investment in the hospitality business.

“Let me reiterate that as a result of the enabling environment and the necessary infrastructural development created, several industrial projects are springing up in Ondo State. Recall that the Industrial Hub at Ore has remained fully functional.

“Our partnership with the Linyil Province of China in this regard has yielded the necessary dividends with more than five industries now operating at the hub, and this has lifted hundreds of our teeming youths out of the abyss of unemployment,” the Governor added.

He particularly appreciated the Managing Director of the facility, Mrs Winifred Akpam, for her courage and love for the state, describing the investment as of great significance which would substantially boost the retail distribution of petroleum products in the State

Earlier, the Managing Director, who appreciated Governor Akeredolu for creating a conducive environment for investors to contribute to the socioeconomic development of the state, stated that the investment would create job opportunities for many youths including graduates and improve the socio-economic status of the state.

Also present at the event were the state APC chairman, Engr. Ade Adetimehin; the Secretary to the State Government, Princess Oladunni Odu; the Chief of Staff to the Governor, Chief Olugbenga Ale; the Head of Service, John Adeyemo; other members of the state Executive Council and other top government functionaries.

Others include the state Commissioner of Police, Bolaji Salami; the Ondo state Chairman of the Christian Association of Nigeria (CAN), Pastor John Oladapo; the Catholic Bishop of Ondo, His Lordship Most Rev. Jude Arogundade, among others.