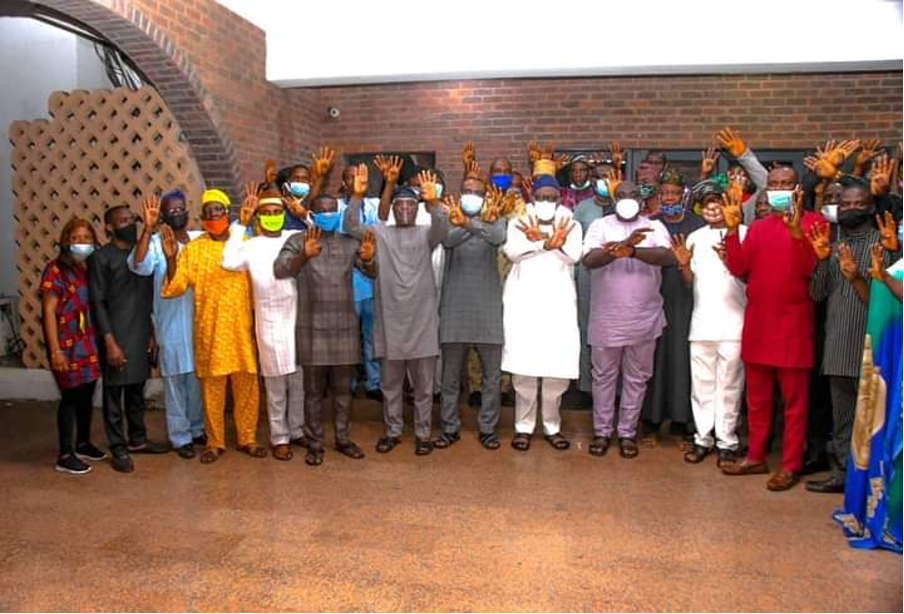 The re-election of Ondo State Governor, Arakunrin Oluwarotimi Akeredolu, SAN, has received a major boost as
Over 1,200 officers of Zenith Labour Party ( ZLP) within the State Executive through the Local Governments to Wards and Units levels in Ondo State have pulled out of the structure of the party.

They dumped the party to declare unflinching support for the candidature of Arakunrin Oluwarotimi Akeredolu, ahead of the October 10, Governorship Election in the state.

This is coming some days to the official defection of the state Deputy Governor, Agboola Ajayi to the ZLP.

He said the performance of Governor Akeredolu across sectors has made his re-election a state wide project instead of limiting it to his party, the All Progressives Congress.

Olubunmi Tunji-Ojo noted with utmost satisfaction the sincerity of purpose of Governor Akeredolu in governance as exemplified in the industrial, infrastructural and other life changing projects across the state.

“He is a key manager of resources and men. He has shown that excellence can be achieved and Ondo state can move forward.

“Governor Akeredolu has been tested by the people of this state and the people trust him. Regardless of party lines, he has impressed people in terms of excellent performance, and that is why leaders from ZLP have come to declare their support for the governor”, he stressed.

In his remarks the Deputy State Chairman of ZLP, Engineer Abayomi Adebayo said the uncommon approach of Governor Akeredolu to good governance endeared the group to the governor.

He said Akeredolu has greatly demonstrated respect for promises and shown that he is committed to the all-round development of Ondo State for the present and future generations to actualise their individual and collective dreams, marks him out as a leader to follow.

Also the State Organising Sectary of ZLP Hon Femi Ikoyi assured Governor Akeredolu of the desire of the group to add significant value to his re-election as Governor of Ondo State.

While describing the group as the political engine of ZLP in Ondo State, Hon Ikoyi stated categorically that with the other alliances the group is bringing to the table for Governor Akeredolu, the re-election of the governor is certainly a done-deal.

“We are the political engine of ZLP. Had someone is coming to Akure. Well if he comes he will meet only the shell”, he said.
In his response, Governor Akeredolu appreciated the group and assured that none of them would regret their joining forces with him.

Arakunrin Akeredolu said he was humbled by the degree of support people of the state across political,religious and socioeconomic leanings have shown towards getting him reelected.

While assuring that he would continue to work for the improvement of the well-being of people of the state, Governor Akeredolu however appealed that every support groups based their campaigns for him on what his administration has done and those ongoing projects that will in distant future redefine the fortunes of the state.

According to the governor, the unprecedented giants already taken in Infrastructural and industrial development; the heights already taken the health care delivery to and impacts on education couple with the facilitating efforts of his administration on bitumen exploitation and deep sea project are all enough to campaign for him.

Why I Picked Aiyedatiwa As My Deputy – Akeredolu