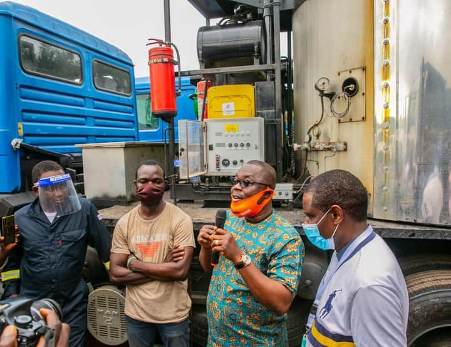 The age-long dream of exploiting the large deposit of Bitumen in Ondo State into commercial quantity has commenced.

An indigenous company, South – West Bitumen, (SWB) which has secured a 25-Year renewable operational mining license for the exploitation of the bitumen through the efforts of the state Governor, Arakunrin Oluwarotimi Akeredolu, SAN, has already moved both the processing and mining equipment into the operational base in Irele.

An official of South-West Bitumen Limited, Engr Oluwatominiyi Adeiya said the needed equipment for excavation, scoping, and processing have been procured for the commencement of the first local bitumen exploitation in Africa.

While identifying the type of Bitumen in Ondo State as Tarsand variant which needs specialised technology for its processing into asphalt, Engr Adeiya assured that by the time the company’s processing plant is in place and it is operating at full capacity, importation of bitumen product into the country will reduce drastically.

He stated that before the end of the year, its product would be ready for its identified and interested local off-takers across the country thereby reducing the amount of foreign exchange being expended on the over 500,000metric tons of bitumen needs of Nigeria annually.

“By December we should have as many as possible stock on the ground. We have identified our off-takers and the off-takers are within the South-West. We are also looking at the entire country and probably when we get there we shall focus on exploration.

“At the beginning, the production output will be twenty thousand metric tons of bitumen in a month and when we are stabilized, we will move to 50,000 metric tons and so on.

“We have brought in two categories of equipment, the first category is the mining while the second category is for the processing. For the mining, we have bulldozers and excavators to be used for clearing of areas of interest. We have been able to map out areas of interest. We are not going to leave the areas open. Once the topsoil has been opened, then the excavator comes in”, he said.