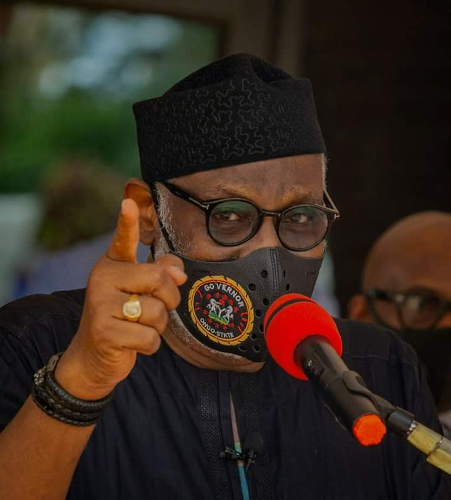 The Governor addressed journalists at the Government House, Alagbaka, Akure on Monday, where he announced his new Covid-19 status.

Governor Akeredolu also announced the appointment of Hon. Temitayo Oluwatuyi as the new Secretary to the State Government (SSG).

The new SSG was until his appointment the Commissioner for Natural Resources in the state. He is also a former chairman of Akure South Local Government.

Governor Akeredolu expressed deep sense of loss and regret of the Government over the death of the late Commissioner for Health, Dr. Wahab Adegbenro.

He said: ”Nothing can ever be enough to describe our sense of loss and regrets. By the outpour of love, affection and testimony to the great and fulfilling life he lived, he will forever remain a true hero that we once had. He stood as a rock in the fight to save our State from the rampage of COVID-19.”

Governor Akeredolu appealed to the people of the state to take the fight against COVID-19 seriously by deliberately implementing all the precautionary measure pronounced and activated by Government.

“It is the right thing to do. The menace of this deadly virus is expanding in exponential measure. It is in fact putting massive pressure on the treatment facilities of Government. I have just been briefed that between Saturday, July the 4th and Sunday, July the 5th, a total of 62 new cases were recorded.

“Presently, the Infectious Disease Hospital here in Akure has been stretched to the limits, so also are our medical equipment and personnel. The obvious implication of this for us, is that prevention is the best way to reduce pressure on cure.

“Before our illustrious Dr Wahab Adegbenro took his bow, a total of 20 people have lost their lives to the Virus, while over 472 have tested positive to the infection. While the number of confirmed cases have escalated, the number of discharged cases as at today is 113.”

As political activities for the forthcoming governorship election commence in the state, Governor Akeredolu also admonished leaders of political parties to adhere strictly to the guidelines in order to assure safety and good health for the people.

“We are also advised to restrict ourselves to relevant campaign issues, and not overheat the polity with desperate utterances, publications and actions capable of unimaginable effect.” He said.