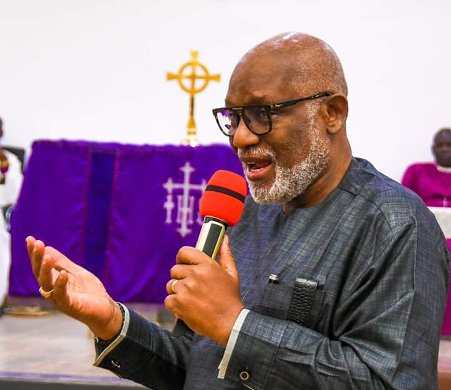 The Ondo state governor, Arakunrin Oluwarotimi Odunayo Akeredolu, is one of the favourites of providence. This fact is evident in his political life. In 2012, Akeredolu jumped into the murky water of Nigerian politics. He eyed the Alagbaka Government House. But many considered him a political novice and stranger in the politics of the state.

Akeredolu sought to fly the flag of the defunct Action Congress of Nigeria (ACN) in the year’s gubernatorial poll. Nobody gave him any chance of clinching the party ticket. But to the suprise of many political observers, he secured the flag of the party.

Akeredolu lost the election because it was not yet his time to occupy the Alagbaka Government House. If it is not your time, it is not your time. There is nothing anybody can do about it. But with the first attempt, providence was merely preparing Akeredolu for the future.

He kept his aspiration to rule the state intact and came back in 2016 to pursue it. Again, nobody gave him any chance of getting the flag of the All Progressives Congress (APC). The popular belief was all the odds were against him. But all unfavorable predictions about his quest for his party’s ticket failed. Akeredolu successfully scaled the cliff of the APC shadow poll and became the standard bearer of the then opposition party.

If anybody thought the intra-party battle was over for Akeredolu with the successful conclusion of the APC primary election, that person was wrong. Some of his co-contestants were dissatisfied with the outcome of the shadow election. While some of them left the party, others remained in the political family but worked against Akeredolu’s election.

The gubernatorial poll seemed a tall order for him. He, however, flew over all the obstacles errected on his path to victory. He secured the mandate of the people to run the affairs of the state for four years.

After running a good race and keeping faith with the people of the state in the last three and a half years, Akeredolu desires another term in office. His desire met strident opposition within the state chapter of the APC. Efforts were made to prevent him from securing the flag of the party. The popular prediction was he would be denied the flag and the denial would push him to another party to pursue his second term aspiration.

Again, all unfavorable predictions have failed. Akeredolu has clinched the ticket of his party to contest the October 10 gubernatorial election.

The political life of the governor has been one of serious battles. But God has always stood by him, proving the truism of the saying that one with God is a majority. Oluwarotimi! What a name with a divine force guarding its bearer!

An African proverb says there are many colourful flowers on the path of life, but the prettiest have the sharpest thorns. This proverb aptly captures the life of Akeredolu. No matter how sharp the thorns are, they will have no effect on your destiny if you enjoy the grace of God.

One must always be conscious of the role of providence in human affairs Providence has a way of distributing fortunes and misfortunes. She is discriminatory. If she is in profound romance with you, everything will work for you. She will always avail you her wings to fly over every obstacle. But if you are not her favourite, the shappest of thorns will strew your path in life and choke your beautiful flowers. This is a fact of human life that we should not gloss over. So, whenever we pray, let us always ask for grace from God.

The life of Akeredolu is a lesson in how providence guards and guides the steps of her favourites in the journey of life. The governor will surely scale the October 10 huddle and the people of the state will renew his mandate. This is because he is fated to spend eight years on the gubernatorial seat. It is also because he has exhibited his love and concern for the state and her people through the sterling performance of his government.

Therefore, let all the aggrieved APC members sheathe their swords. It must be realised that if brothers fight to death, their inheritance from their father will go to strangers.

With the peace that characterized its gubernatorial primary election, the APC has proved that it is like the scrotum of the ram. It will only dangle. It will never fall off. To God be the glory.