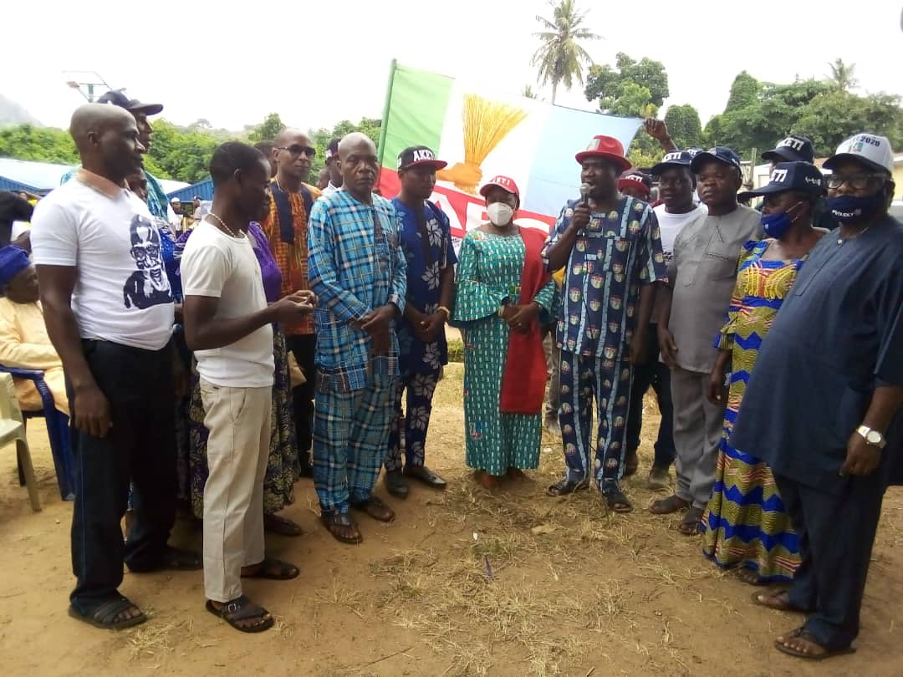 Ahead of the Local Government polls coming up on Saturday, the 22nd August, Akoko born All Progressives Congress strong woman and Commissioner for Women Affairs and Social Development, Mrs. Titilola Adeyemi has called on the good people of Akoko Land to consider voting the APC Chairmanship candidates in the Local Government Council Areas making up Akoko Land a top priority. Using Akoko South East Local Government as a point of contact to all the council areas in Akoko Land, Mrs Adeyemi charged the voters to invest their electoral interest in the APC Chairmanship and councillorship candidates in Akoko South East.

While rallying support for the Chairmanship hopeful of Akoko South East and all the Councillorship contestants, Mrs Titilola Adeyemi led a crowd of excited APC members of the local government area to a campaign walk and political rally, which started at Sosan Ward 11. The rally moved from Sosan to Ipesi Ward 6 and later on there was political convergence of the APC campaigners at Ifira Ward 13, Ipe/Epinmi and Isua communities.

Major highlight of the political rally was the official acceptance of defectors from PDP and ZLP in Akoko South East who were received by Mrs. Titi Adeyemi and other APC stakeholders in the area. A total of 32 people decamped and 6 of them were women.

While addressing the APC crowd at the rally, the Honourable Commissioner for Women Affairs and Social Development, Mrs. Titilola Adeyemi urged widows in Akoko East who have not registered for the Government’s organised ‘Ondowidows Care’ through which widows are provided with palliatives, should go and do so, adding that those who are yet to open a bank account should go and do so as they will be getting alerts soon from Government.

While highlighting the achievement of Governor Oluwarotimi Akeredolu, Mrs. Adeyemi said the “talk and do” Governor of Ondo State has spread his development plans across Ondo State and Akoko Land is not an exception. On the Youth emancipation program of Arabinrin Betty Anyanwu Akeredolu, the Commissioner for Women Affairs and Social Development said the amiable wife of the Ondo State Governor will soon open a website where youths will register and indicate their vocation of interest, noting that Mrs. Akeredolu is poised to empower the youth population of Ondo State. “Mrs. Akeredolu wants the youths of Akoko to know that they will not be used and dumped after election, stressing that there are plans to encourage the youths to start up their own business ventures and they will be adequately assisted by the First Lady’s Social Development agenda.

In his reaction, Hon Adurogboye, the APC Chairmanship candidate for Akoko East thanked Mrs. Adeyemi for her strong support for his candidacy, describing her as the Amazon of Akoko politics. He said with the support of the Honourable Commissioner and other APC stakeholders, the Saturday Local Government poll is for the APC to win and it is going to be a free and fair poll.